I needed 10 Meter capability but have power lines just behind my property that keep me from putting up a nice big ground plane.  I’ve been messing around with horizontal dipole antennas for a while and found this assembly from MFJ.  This is a mount that lets you use a pair of stick antennas in a dipole configuration. 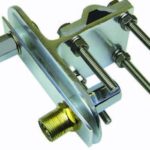 I purchased the MFJ-347 mount and a pair of 10 Meter stick antennas.  The assembly is intended to be used in a horizontal dipole configuration but as a group, the RCARA 10 Meter Net has agreed to using vertically polarized antennas.  My existing 10 Meter horizontal dipole had very bad reception already.

Why not put it into a vertical placement and see how it works.  So far I have to say that the response from the tuesday night 10 Meter Net crew is a huge improvement! 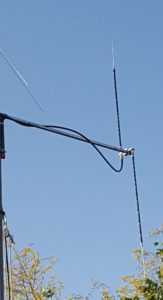 A new arm for my antenna mast was assembled using galvanized gas pipe fittings from the corner hardware store.  I will be adding the second arm to this mount to relocate my 2 Meter antenna so the two are six feet apart.  I have another five foot section to go above where I plan to mount a Ubiquiti Mesh network radio but that’s another project.